How weekly check-ins are changing our company

If you’re reading this blog post, you’re probably like me. You’re passionate about your people, you want to manage them well, and…you’re completely frustrated.

Because your productivity goals aren’t often met and your staff aren’t getting any better at their jobs. Even worse, as their manager you can see “please help me be successful” in their eyes, but you don’t have a clue what to do. Sound familiar? Me, too.

A glimmer of hope

I have done regular check-ins with my staff for years. It was usually a once a month thing, but when one of my staff guys mentioned he had difficulty prioritizing his work, we decided to start meeting every week. It was revolutionary. I started to understand his work, his challenges, his dreams, his passions, his strengths and his weaknesses. In short, I started to understand “him”. He had always been a smart, hard-working guy, but soon after we started meeting he began to produce more work, better work, and more importantly, the right work.

I looked around my company, (and in the mirror), and realized I had not been leading my team well. I may not be the sharpest knife in the drawer, but I quickly realized that I needed to have weekly check-ins with the rest of my staff.

I started by putting together a Google Form – something they could fill out 24 hours before our meeting. That gave me

the opportunity to gather my thoughts before we met. The form included questions about goals, priorities, productivity, values, and their impact on the team. I also had them answer questions about personal and professional development and any particular ways I could be of service to them

It sounds like a lot, but in reality it’s been pretty easy to fill out. (And the meetings were only 15-20 minutes long.) Most importantly, after just one or two check-ins, I think all of us began to experience a change. Based on the feedback I received, the staff were feeling known, heard and directed (in a good way). They had a much better idea of what they were supposed to accomplish, and they were proud when they delivered! They also began to feel like I was their advocate – that I was “in it” with them and that I’d help them succeed any way I could.

Aligning the team to the mission

Simon Sinek had a fantastic TED talk years ago entitled “Great Leaders Inspire Action”. In it, he said:

For me, the check-ins have given me the opportunity to help make sure we all believe in the same mission. It also helped me begin to crystalize our company’s short and long-term goals. I began to see the “important work”, and I made sure it was getting done. We moved forward MUCH more quickly, and it started to feel like we were doing the right things.

It didn’t take long to feel like the office was a different place. There was a buzz…an energy – the energy that happens in an office when people feel like they’re accomplishing important stuff.

I’m not saying that every day feels like this, or that somehow the weekly check-ins are the magic elixir that will dissolve every problem. If you don’t care about your staff or you can’t come to an understanding of your vision, you’ve still got fundamental problems to solve. But even then, perhaps having these regular meetings will help. You never know, maybe your staff will have some answers, too! 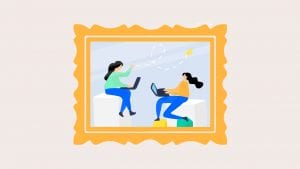 Effective Types of Feedback and When to Use Them

How Managers Can Get Better Results by Being Better Communicators

Scroll to Top
We use cookies to ensure that we give you the best experience on our website. If you continue to use this site we will assume that you are happy with it.Ok